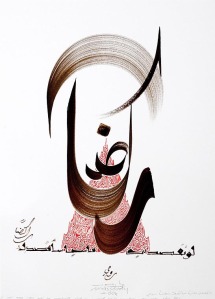 Do you have your own perfume Kryptonite – a note that makes you turn green in all the worst ways to the point of feeling physically debilitated? Something you just can’t stand no matter how hard you try and no matter what you do – a note or an accord that won’t work for love, money or threats of asphyxiation?

Until recently, I had two. Two notes, two accords on the bass lines of perfume, but no matter how hard I tried to expand my olfactory vocabulary and horizons, my nose and amygdala just weren’t feeling it.

I hated…amber. That smoky, boozy blend of labdanum, tonka, benzoin, vanilla and other components was complete anathema to my nose. It was just too… animal, too obvious, too…much for this cerebrally inclined chypre fan, so I would just pass them by and leave them to the brunettes of this world to appreciate, thank you very much.

Labdanum in its unadulterated state was another story. Labdanum with all its intimations of goatish animal got my motor running for many suspect reasons, which is why I made it a component of the Devil’s scent.

So it was until I came across an article in the UK Guardian around Christmas last year about that elusive Holy Grail called Sex in a Bottle. One way to grab my attention, so off I went to locate a sample of this fabled ‘fume, and by golly, it was…Sex in a Bottle. It was everything I hated and detested, and it was unlike anything I had ever encountered before and rarely since. It was – indeed, is – one of the most celebrated amber-centric perfumes on Planet Earth. It was Ambre Sultan by Serge Lutens. To this day and to this amber-phobic, it is the Khadine of ambers. A decant made its way into my hot little hands before long, and over the course of this winter, I killed it to the very last, über-precious golden droplet.

Maybe I just hated bad ambers? On I went to Olympic Orchids’ Olympic Amber, and learned to appreciate the amber-based drydowns of other perfumes since. Olfactoria may claim to her heart’s content there is no such thing as too many ambers, but I wasn’t entirely convinced of the truth in that statement.

Enter another devious Great Facilitator, JoannElaine of Redolent of Spices and a care package she sent with much love. Nestled among the storied glories of that prosaic cardboard box was a small vial containing an amber fluid and the label ‘Rumi Neil Morris Fragrances.

My curiosity will surely do me in some day. Even though there were other stellar contents in that box, that little vial was the first one I reached for, unpacked, and sniffed. Yum. I sprayed. Next I knew, I swooned, which is the polite way of saying that a large amount of unprintable language ensued and I had to sit down.

Neil Morris is one of the inside secrets of the perfume world so hyper-cool, no one you know has ever heard of him, unless you know a few dozen perfumistas. I read about him and a few of his fragrances on the Perfume Posse first in connection with a New York Sniffapalooza, I believe it was. The extent of my knowledge was…he’s a Boston-based perfumer, he makes really good stuff, he’s a big, burly, adorable teddy bear. He’s made perfumes for the now much-mourned Takashimaya department store in New York, bespoke creations and a collection of about forty perfumes known as the Vault Collection along with his main line of fragrances.

Oh. Yes. The utterly swoon-worthy contents of that little vial that gave me a rate of about 50 cps and revving. (Cows Per Second. For the SLS definition of having a cow, read this.) He made that, too.

Rumi – Neil’s perfume tribute to the famous Sufi mystic, teacher and poet of Konya – is an amber like the Khadine, closely related but sweeter and rosier, not so intimidating to look at but every bit as saucy. It is heady, rich and opulent like all the very best ambers and then again, not all ambers have made me swoon quite so much. I can tell you the notes – see below – and still, I won’t have managed to convey the overall impact of this.

Just as Rumi the teacher, the poet, the mystic was a proponent of transcendence as a path to divine love – this perfume is nothing more nor less than…a transcendent amber. It starts with a punch in the senses of deep rose and plush ylang ylang, but that glow in the dark, velvety aspect of benzoin, patchouli and amber is never far behind and there it stays and it pulses like the living, beating aura of some otherworldly, sacred creature. It stays, finally glowing down to embers of spice, patchouli, myrrh and frankincense, says my nose, and I never, ever want it to leave.

You may come to ‘Rumi’ as simply a spectacular amber. Meanwhile, I sit here in my perfumed cloud and for the first time all day, I feel centered, peaceful, I feel as if I’ve surpassed and suspended my own petty limitations, silly wants and desires to somewhere…elsewhere, a space where only the moment exists and this moment is enough and more than enough, a space I never knew until this deep, deep breath of heart and soul, faith and laughter combined. In one word, it would be…joy. The joy of the moment, the joy of the soul, the joy that comes from feeling yourself connect from the grass beneath your feet all the way to the stars whirling their own celestial devotion above your head – you are all of you all of it and all of it is…one.

If anyone could understand such a feeling, it would certainly be Rumi, if any perfume could evoke it, it would be the one named for him.

Come to me running, Rumi, and let us whirl with our joy out beyond the stars!

Neil Morris, you blew me to dandelion fluff! Thank you for that! Now I can only wonder what other wonders have you made?
For JoannElaine, thank you is far too small a word for the epiphany that you sent, devious facilitator that you are!

3 thoughts on “Come To Me Running!”