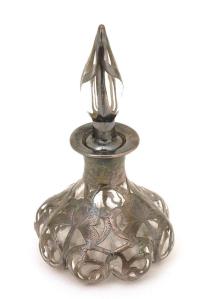 Imagine we’re playing a word association game, where I say a word, touch your nose and you then tell me the first thing you associate with that word. No thinking! Here goes.

Perfume. Ah, see – already, your nostrils are flaring. Perfume – heavenly scents in beautiful bottles, exorbitantly expensive, conjuring up any number of images and emotions – the clay-like smell of a newborn baby, the fragrance of baking bread wafting through a room, the aura of evergreen and orange pomanders in December, an exquisite scent in the air, trailing after a beautiful woman – or a man. All of these bring out any number of associated images and accompanying scent-memories, all prompted by one word – perfume.

Which is to say – by choosing the word ‘perfume’, our brains have already taken sides on the qualifying line of good vs. bad: perfume = good. The word ‘smell’, on the other hand, is neutral. Something can smell good or bad. Stink, on the other hand, is all – bad. The phrase ‘the heavenly stench of humanity’ seems to contradict almost everything we’re indoctrinated with in this hygiene-obsessed age, which at the very least is to smell like nothing at all.

The thing is, we all do – smell like something even when we don’t, all leaving behind an imperceptible trail of our own unique selves, all of it registering on a gut level of awareness our brains record and that we react to emotionally, but aren’t consciously aware of. Science has proven that women in particular have acute noses due to hormone levels, are able to perceive which men have differing immune systems, and be attracted precisely for that reason, no matter what we can articulate to the contrary. It even works in the opposite direction – during menstruation, we gravitate toward more nurturing, caring men, but during ovulation we want the bad boys, the alpha males, the heartbreakers who give us babies with survival instincts and superior genes.

Perfume – the word – makes us associate something good, the smell of roses, of lily-of-the-valley, of incense and cinnamon and Shalimar and Narcisse Noir and Mitsouko and any number of names branded into our awareness of – perfume.

At least, that’s how it used to be. Because in 2006, the renegade French niche perfume house of Etat Libre d’Orange decided to push the buttons of perfume preconceptions everywhere and gave an unsuspecting world a stupendous creation named ‘Sécrétions Magnifiques’ – Magnificent Secretions. A liquid love letter, if you please, to the ‘heavenly stench of humanity’. Sweat, saliva, milk, sperm, blood – oh, yes! Let’s not forget, these are the folks behind such euphonious perfumes such as ‘Putain de Palaces’ (Palace Whore), Jasmin et Cigarettes, and my own favorite, ‘Don’t Get Me Wrong, Baby, I Don’t Swallow’. I would love to see that advertising…

I came across a few drops – I wasn’t fool enough to try it on my skin – in 2008, and I think my olfactory synapses exploded. That’s what I got for thinking that perfume should be beautiful, that scents should smell good. Because it was – at least to my nose – the stench of humanity, and no heaven in sight. Spunk and funk in a bottle, with added blood. Or I could put it another way – the kind of night to remember you could never, ever, tell your mother you had, or even your best friend, because it involved hair-raising activities neither would approve of.

But is it perfume if it stinks? There are people, I’ll have you know, who actually buy this stuff – and wear it, in public even. Is it possible that this is in effect one overlarge and very hyped practical joke – to turn our perceptions upside down, to make us aware of just how far we’re removed from our animal origins, to make us aware, in fact, that no matter what we wear, no matter what we buy, dab, spray or embalm ourselves with, underneath it all, buried beneath layers of soap and shampoo and body lotions and deodorants and scents in all permutations – people, let’s face it. We stink.

In a famous letter, Napoleon wrote to Josephine: “I arrive home in three days. Don’t wash.’ That got many laughs since those letters were published, simply for being so alien to our modern sensibilities. Ew. Three days without soap and water, in an age without deodorant, even. Napoleon wanted Josephine, not Josephine with an overlay of the musky scents she loved to wear, but the musk that was all her own.

Once upon a time, I had a boyfriend, if not as extreme as Napoleon, who could relate to that. The day after a rip-roaring party, when I wafted hangover, leftover scent traces and cigarette smoke, always did him in. So far as he was concerned, I only lacked one thing to be perfect.

The extra layer of ‘human’ that Etat Libre can now supply in a bottle.

I live for many things – for music, for literature, for my writing, my loved ones, for art and for the art that is – perfume. I live for the epiphanies in bottles that make me…walk taller, feel better, feel prettier, sexier, more in command of strange situations, more confident and at ease. Just as Jean Grenouille in ‘Perfume – the story of a murderer’ was shunned for not having any human aura of his own, I feel somehow diminished without perfume, less complex and even – dare I say it – less human and definitely less female.

I also live for those moments that turn my world on its head, that make me change my perspectives and question my assumptions and the Big Fat Why of It All. I live to be challenged – even by a perfume that so far as I can tell, is the complete antithesis of what I believe perfume should be. It’s another form of artistic expression that’s every bit as valid as any other, even if it leaves me cold, indifferent, or in hives.

Which is more than I can say about 95% of the contents of perfume counters these days. 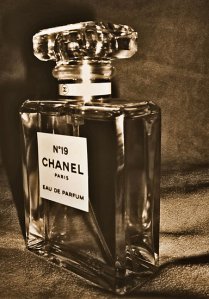 Indulge me for a moment. Imagine the year is 1982. The location Copenhagen, Denmark. Nothing like the Hipsterville it is today, nothing like the romantic, copper-roofed old Nordic city seen in movies, but a dire, dour downer of a town. Unemployment is high, spirits are low, and an entire generation is busy declaring they have no future at all with all the passion of the very young and disillusioned.

Picture this: Hanging around the fringes of political activism, underground art, the squatter’s movement and general malaise is quite possibly the world’s cleanest punk. Second-hand Doc Martens, fourth/fifth and sometimes sixth-hand clothes hanging by one thread, black of course. This young lady – for that she is – has few hopes of anything much at all, and maladjusted doesn’t even begin to describe her. She’s eighteen going on nineteen going on a very crotchety ninety, a dangerous age, getting into scrapes, getting into trouble, getting arrested at demonstrations for her fast and furious mouth, hurling old toilet commodes out of the windows of squatted buildings at the police who are there to kick her out, along with her closest eighty rabid activist friends.

When she’s not wreaking havoc with her fellow anarchists, she hangs out in one haven for the misfits and Misfits fans, a book café in a side street that never sells that many books, but people club together for vegan potluck lunches, argue about music and political theory, and where to run if the cops crash the next squat.

Remember, she’s arguably the world’s cleanest punk. Despite her demeanor, despite the forbidding eye makeup and the safety pins and the scuffed boots and bitten fingernails, she is scrupulously clean. Her beloved grandmother did not crawl out of the gutter of the working class just so she could wallow in her own brand of dirt. That, too, gets her into trouble, because soap and water are so oppressing, so bourgeois. So not punk. And there’s that other thing, that other not-cool thing to do that she does – she wears perfume.

One day, when no one is looking and she has a little cash that didn’t go into the communal anarcho-syndicalist potluck/LP/herbal tea kitty, cash she didn’t say she has, she sneaks into a local department store feeling in the mood for something sneaky and stealthily subversive. Two hugely guilty if very happy hours later, she leaves – with a bottle of Chanel no. 19 eau de toilette.

Sure enough, one warm spring day just after her nineteenth birthday, her sometime boyfriend notices an aura that has nothing in common with stale beer, herbal tea or cigarette smoke. Being her boyfriend, he makes a comment, and the poor girl is instantly lambasted for supporting such a capitalist, commercial enterprise as Chanel. Suddenly, even her very political stance is called into question – because of her perfume. She may be a punk – but she’s also a g-i-r-l. At age nineteen, someone finally notices!

Stealth subversion at its finest. A punk in French perfume, and not just any perfume, but Chanel no. 19, as opposed to the far more common no. 5.

These far too many years later, and the former punk is no longer quite so angry or so defensive. All these many years later, she still wears Chanel no. 19, whenever she’s in the mood for a little subversion. It calms her, grounds her and focuses her attention on the things that really matter.

Taking over the world, for instance. She can name at least two occasions where her qualifications – and possibly her Chanel no. 19 – landed her some very high profile jobs.

Chanel no. 19 is a chilly, green and even slightly intimidating perfume. The kind of perfume you’d imagine Sigourney Weaver wearing in ‘Working Girl’ – not compromising on femininity, or much of anything else, for that matter. It’s a take it or leave it scent, from the first cool, muted burst of galbanum to the far dry-down of earthy vetiver, and all the silky-smooth stages of iris and rose in between. It has no need to be loud, no need to wear its heart on its dark green sleeve, but you will notice it, you will pay attention and you will do as she bids you – or else. The perfect scent for Ms. Phrigidaire.

The different concentrations offer a surprising evolution of the same scent. The parfum is like cold, slippery, gray-green satin, emphasizing the happy marriage of iris and rose. The eau de parfum is less focused on the rose/iris and more on the leathery, vetiver and oakmoss base notes, whereas the eau de toilette is lighter, with more of a galbanum kick and a flirtier, more lemony iris middle.

It has certainly been reformulated due to IFRA restrictions. The Chanel no 19 I remember at age 19 was much richer, more faceted and less fleeting than the one you can find today, but having said that, some loves last well beyond the age of nineteen. Even this one.

Notes according to Basenotes