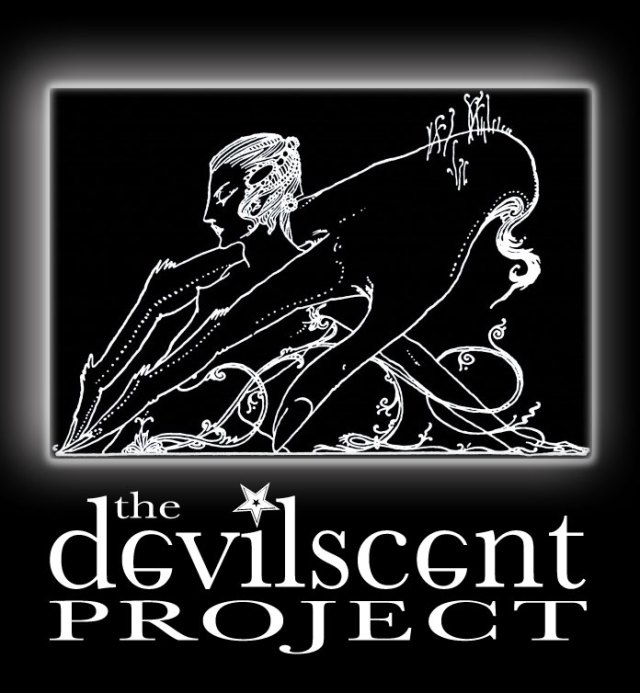 – what happens when a dude meets the (liquid) Devil

It’s that witchy hour of darkness right before the birds herald the sunrise, when even in the city that quietude sighs, breathes and all the world is cool and still, when a starless, dark sky hovers on the purple-cobalt blue edge of enlightenment, and very few creatures stir in the shadows.

This is when I slither in and insinuate myself between the empty spaces on a shadowy sidewalk, when I wind my way up the stairs to the Genie’s garret and expect to find a woman dreaming beneath her Fleurs d’Orangers scented feathers, guarded by a fat, jealous, orange-yellow cat.

This summer night, wafts of elderflower and night-scented stock wend their way in through the windows open to the courtyard below, Janice Divacat mewls in her sleep, and Hairy Krishna sighs in his own, rolls over on his back and snuggles closer to the Genie.

Only this night, she no longer sleeps alone with just her cats to guard her. This time, this night, something tall, hirsute, dark-haired and emphatically male has wrapped himself around her other side to keep the dragons and chimaeras from her dreams.

I call him the Dude. He has other names and other avatars, treads his path carefully around chimaeras and dragons of his own and others’ making, but… he’s definitely a dude. The Dude.

He and the Genie go back, as they say, not because they have a history – although they do – but because they have seen each other through disasters and miracles and laughed and cried and talked as they did, and all the while, a friendship was cemented and a connection maintained, and sometimes, being all in one to a writer is even too big a burden for this muse to bear, so I nudged a few things along in a few right directions, just to get that party started.

It was either that or hang the ‘crazy cat lady’ sign on the door, and between you and me, that would be a shame. She was already in mortal danger of blowing away like a desiccated Rose of Jericho in a hard desert wind, of losing her hopes for the future and her future dreams of glory, and her far more secret dreams, the ones she never tells anyone but me.

For contrary to what you might believe, the Genie is not all self-motivated and self-directed, but thrives on feedback and external energy sources and again between you and me, she’s suffered from an appalling, all-encompassing lack of faith in her ability to ever write anything meaningful again after her dreadful experience with publication.

She needs other people to kick her and prod her and galvanize her into action, so I located a friend who’s had a monumental crush on her for years, and instead of seeing a great and truly platonic friend, one night she looked up and saw the human equivalent of a gourmet chocolate truffle (and a decidedly Plutonic Scorpio, because she has a thing for those), saw past her own objections and dilemmas, and thought…

They’re both there to heal each other, and while I can’t tell you whether or not it will last since that’s not the point, I can tell you in no uncertain terms that neither of them will be quite the same for it, and that, too is my reward for pushing a few obstacles out of the way to make something happen, something good, something… that might well lead to new stories, new reviews, new books for new audiences in new locations.

Which is my whole raison d’être in a nutshell.

So lately, the Genie’s garret has sounded more like a pigeon coop in spring, just with twice the amount of billing, cooing and telepathic Scorpio stares. There’s no talking to either of them these days. It would be fair to say they’re not even in the same galactic neighborhood as the rest of us.

But a Muse has gotta do what a Muse has gotta…. etc., and one evening, the Genie realized that for the first time in her life, she had the perfect excuse to bombard a dude with perfume. Not just any old perfume but Devilscents, just to sit back and admire the fireworks. To hear what he would say and what he thought about them, to discover whether her perfumers as well as her brief had managed to capture lust, love and redemption in liquid filigree, essence and absolutes.

To make sure he parked his preconceptions by the wayside, she even took the precaution of blindfolding him, so he wouldn’t be distracted.

What follows below is an abbreviated version of the running commentary on five Devilscents, five because eighteen were made and a dude can only handle so much at one time. Other posts could follow if her backlog doesn’t get in the way, but my job – if I have one – is to inspire, sit back and admire all the fireworks I’ve instigated.

All four of these perfumes have been reviewed by the Genie (you’ll find the titles linked to the relevant posts), yet these aren’t her reviews but the Dude’s.

“If this is Dev, then he’s a slick bastard.”

“So slick, he slides up walls.”

“No, I mean… this is the urbane Dev, the metropolitan Dev, the guy all those women say they want, but secretly aren’t sure they can handle. Hmm… it smells dangerous, swellegant, dead-sexy… no, make that smexy – I like smart AND sexy – and expensive and like a whole lot of heartbreak in there, somewhere.”

“No. His. Who’s to say even the Devil’s heart can’t be broken? How would you know? I mean… he’s the Devil, for crying out loud. Everyone suspects he doesn’t have a heart, since he’s Evil Incarnate, but what if he does? And she breaks it?”

“Milton said he did. But you don’t know how it ends.”

“Yet. But this perfume is a great start. Very expensive, very deadly, very alluring sins all wrapped up in one literal helluva perfume. I’d wear it, but I’m not sure it wouldn’t wear me. Maybe that’s the point. Find me at the bar exuding testicular ‘tude. Call me Damien. I promise to text you the next morning. With something so twisted, you can never, ever tell a soul.”

“I promise I’ll be grateful.”

“Caramel and chocolate and wow, heat! An awful lot of heat. Hand over the chocolate and no one gets hurt. It’s making me crave chocolate. And things that remind me of chocolate but aren’t precisely… edible. I smell hunger. I smell rock’n’roll. More danger. A dangerous hunger, maybe? It could be a hunger for food, or the other kind. Wait. Screw the food. This is definitely the other kind.”

“<unrepeatable language>. WHAT is THAT? That’s just… wrong! That’s just so wrong and so … wrong, and holy <bleep>, is it scary! Eeeeep. Give me a minute here. Geez. There should be laws. Has this perfume been banned by Pope Francis yet? He totally should. And the UN. Not to mention NATO. This perfume is a biohazard. Meaning it’s hazardous to any female who sniffs it. I don’t even want to know how you can have this in your perfume cabinet without encasing it in lead.”

“That would be a bit counter-productive.”

“True. For one thing, I’d never get a decant. You’re giving me some, right? I mean, I’ve got to test-drive this on a receptive audience.”

“That was last night.”

“In which case, I can’t be held responsible for the consequences.”

“Great! We’ll send out for pizza and live horizontal lives.”

“I’ll buy you a Dictaphone. And a secretary to transcribe. But you’re not allowed to leave. It’s that kind of perfume.”

The Anticipation Will Kill Me – Neil Morris Fragrances Midnight at the Crossroads Café.

“Man. This is… something else. This is… what anticipation smells like. It smells like how those old blues records you play sound. Like this is something mere mortals never know, and probably couldn’t handle if they did. It’s dark and spicy and it’s delicious, and just maybe they’re the same thing, but you’re hooked into it, you can’t leave and don’t want to, because that road up ahead says “Perdition Avenue”, and you’re like… yupp, that’s where I’m going, because that’s where all the fun is. Redemption, schmedemption. There’s no such thing anyway. So go ahead. Follow the magic footprints right down to the crossroads of Perdition Avenue and Jeopardy Lane, sit down, drink the wine and live, whydoncha?”

“Which was the general idea.”

“No. That’s the reality of these perfumes you ended up with.”

“Ah. Man. More heartbreak. This is an aftermath perfume… the ‘it’s all over now’ scent. It’s grounding and sort of comforting, but there’s a lot of tears in there somewhere. Tears the color of India ink. It’s sort of moody and introverted and introspective and ummm… melancholy? Yeah! That’s it! It wants to be Dev #2, but of course, you can’t go back, you never can, so we end up at heartbreak. I say that if these perfumes are anything to go by, Dev did have a heart, and it was broken. Only he’s too cool and too proud to ever admit it, so he sulks inside this green-black cloud. I’ll tell you this – it’s some cloud! Bring your own thunderstorm. Or just your own tornado. Brace yourself for the consequences.”

“Not my favorite one. It’s a dark, dense, twisted forest of a perfume. Like bottled Mirkwood. With added heartbreak.”

“That’s all. And that’s enough. It’s already much more than I deserve.”

“Deserving had nothing to do with it.”

I’d better go. The sun is just up, and pretty soon, the Genie will be getting ready for her day before she wakes him up for his own with a cup of coffee, and they’ll waltz through their week, surviving on sunbeams, suggestions and highly salacious text messages, like all twenty-first century lovers everywhere, like all those stories throughout time, borne on the heated scents I inspired through all those likewise infernally inspired perfumers called the Devilscents.

With thanks to the Dude. Who said that was so much fun, they really should do that again…