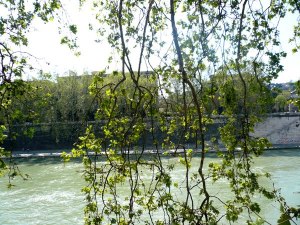 A tale – and a review of sorts – of Puredistance ‘Antonia’

It started as so many days did, with that all-important question in front of her perfume cabinet early that morning. What to wear? What face did she want to show the world today of all days, today when she was off to the Eternal City where a rendez-vous awaited?

She didn’t care. But she cared enough about the question to reflect for a moment in front of that cabinet. It would be Rome, one of her favorite cities in the world. Rome would be warm, and that ruled out other, more obvious choices. He would expect something seductive, something enticing him to bite. Expectations, she would have to teach him, could be dangerous.

So she had reached for that almost clinical glass vial, nestled within its white and green box, and a Botticelli Primavera wrapped herself around her like a flowering vine, shooting green sparks of sunlight across her skin, making her feel half her age and half her experience, which was his age exactly.

What was it, she thought later, sitting in the Roman sunshine later that afternoon, that made this perfume so enticing? Was it that verdant, lemony kick of galbanum, was it something that must have been hyacinth and orris, blooming all around her? Was it the practiced, flirtatious smile of the waiter taking her order on this Trastevere piazza, addressing her in caressing tones: ‘Signora…per piacere.’

Or was it that wearing this, feeling as she did, waiting for a friend poised to be a lover, that everything was easier in Rome on an April afternoon by the Lungotevere Raffaello Sanzio, where the linden trees sprouted leaves as tender as her newly exposed self, bursting out of a long winter’s sleep and the Tiber frothed below the embankment the same apple green as the dress she wore, the same green as this perfume and her hope?

That must be it, she decided halfway though her Campari soda. She thought not so long ago that hope was a luxury not even she could afford, that she was too old, too jaded, too cynical to ever hope again, no matter that spring was just around the corner.

But April was here now and she was here in Rome, a city that celebrated life in a country that loved it no less, exuding spring in her dress, La Primavera in her perfume, and in the delicious anticipation she could taste as clear as any Campari soda, as sharp as the slice of lemon in her glass, the same liquid gold as the sunshine on the piazza on a Roman afternoon.

Even here in the heart of Trastevere, spring was obvious in the foaming green of the flowerpots in the windows of the apartments above. The flower seller on the other side of the piazza was doing a brisk business in tulips and hyacinths. Hyacinths for the soul, went that old saying, and surely, there was hyacinth in the soul of this perfume? Hyacinth in her own soul even, when she saw him walking down the Via Gustavo Modena towards her, wearing a shirt she had bought for him in Milan, the exact green of his eyes and the exact green of her own dress.

He could be Italian almost with that dark hair and that proud, leggy stride, that strut of the shoulders men somehow lost past the age of thirty, a touch of Roman pride and braggadocio in the way he scanned the piazza looking for her.

He saw her then, sitting in the sun with her Campari, and his grin was as reckless as she felt on that Roman afternoon, as happy as the first rays of light on her skin after this endless, gray winter.

He grabbed her hand and kissed it with a flourish. “Cara!” he exclaimed with a grin.

“Sit down. Campari?” As he held her, as he kissed her, she could taste his anticipation.

“Of course! When in Rome…” He sat down next to her, and did not let go of her hand.

She could believe, on such a spring afternoon on a Trastevere piazza, that she was still young just a little longer, that those laughing green eyes would be there the next morning, like this verdant scent and this delicious moment.

This April would last eternal, just like the city itself, and their shared anticipation, the green of possibilities, green as that very special perfume she wore for a special, eternal April day.

With eternal thanks to Dee, who made it possible, and to another inspiration!

Puredistance Antonia is available at Luckyscent, the Puredistance website, and First in Fragrance.

21 thoughts on “An Eternal April”