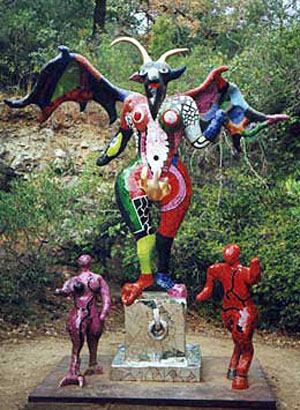 Once upon a time, I was too poor to buy perfume. I knew nothing of samples, decants or Fabulous Fragrant Facilitators, and although I did know a bit about perfume, I didn’t know enough not to commit one Cardinal Sin – otherwise known as The Ultimate Exercise in Perfumista Masochism.

If temptation lurked anywhere, it would have been within the pages of that catalog. Somehow, it seemed to fit that I encountered the name of a line of perfumes that stopped me cold in my superheated fragrant phantasmagorias…

Not even my polymorphously perverse imagination could have cooked that one up! This Hammer fan girl was floored…floored that these things happen only in real life and floored such evocatively named perfumes existed.

Damien Bàsh is a photographer and artist so hyper-refrigerated cool, I had never heard of him. But just as with the other contents of that catalog, all I could do was dream of the day I’d waft something diabolically fahbulous, dahling, and when asked, I could look up my short and snooty nose and say in my best Dietrich alto voice… “Lucifer…number three.”

There is an abiding admonition in metaphysics.

“Be careful what you wish for. You will get it!

These not so many years later, and my, have I evolved! Thanks to my perilous prose, I now have acute indecision every morning over What To Wear Today. I can even say with utter conviction and a bad Dietrich imitation, that I am wearing…Lucifer no. 3.

A name like that carries certain associations. Since those days of the dog-eared Aedes catalog, I even managed to cook up my own version of that fabled and much-maligned creature…

The Devil. Lucifer, the Bringer of Light, the Adversary, the Questioner…although I doubt he would be someone John Milton would recognize. My hapless protagonist of my 21st-century Faustian tale, Quantum Demonology, is undone by not a few things that fateful night she makes her deal with the Devil, but more than anything else, it is his scent that unglues her.

I can close my eyes right now and evoke that perfume, almost breathe it in as I type…and it is not, I’m happy to say, Damien Bàsh’s ‘Lucifer no 3’, since if it were, I could never wear it. For one, it would be hard to think one coherent thought, never mind write them it down.

What ‘Lucifer no. 3’ does have in common with that fictional ideal is incense. And is there any better time of year for one of my all-time favorite perfume notes than November, that month of deepening dark and the cold stone and steel breath of winter down my spine?

It kicks off green and bright, bergamot and orange and that pine-lemon kick of elemi bouncing in on a moonbeam, but right behind it are intimations of darker, deeper things, shadowy whispers woven into that bright green opening light that breathe a calming, centering puff of myrrh and frankincense, sandalwood and labdanum, with fir resin accentuating and continuing the woody-lemon green elemi. As it evolves throughout its lifespan of about five fleeting hours, it becomes a seamless, smoldering mélange of myrrh, sandalwood and glorious frankincense, but not, I think, just any frankincense.

The scent of frankincense can vary wildly according to variety and location. The same species of Boswellia in separate locales can produce completely different facets of frankincense. Somali frankincense smells nothing at all like the (justly!) famous Hojari frankincense of Oman, and again, nowhere similar to Indian frankincense, which is earthier and spicier.

I can’t say for certain what variety was used for Lucifer no. 3, but take it from me…it’s very, very good. It shares certain characteristics with the three samples of Omani frankincense I have in my Devilscent kit and with the drop dead devastating incense used by Amouage, so I’m going to guess it’s Omani.

This Devil is a very smooth, suave, classy Devil. He doesn’t shout his presence, doesn’t bother with any obvious associations of evil or even gender. This wears equally well on both men and women, and equally appealing. The sandalwood is silky smooth, the labdanum with its goatish touch is just that – a touch. And meanwhile, the myrrh and frankincense dance such a beguiling, subtle dance on my skin, and perhaps that’s the biggest surprise of all – this is an understated perfume, which does not make it forgettable.

It shares something of the same elegance as another favorite incense of mine, Andy Tauer’s ‘Incense Extrème’, but isn’t quite so austere or bitter.

This is a Devil I love to wear. I came to find out that it hasn’t received much love in the blogosphere or even many reviews, possibly for being guilty by association – c’mon…Lucifer! – and then not delivering that hoped for Ultimate Bottled Malevolence. (I think Etat Libre bashed him to it!)

But the Devil has been infinitely maligned as the perpetual human scapegoat, the Fall Guy for all our human failings, and if ‘Lucifer no 3’ is an olfactory interpretation of that archetype, then maybe there’s much more to the Devil than most of us think – if we think of him at all!

My own conjuration stalks my dreams and my notebooks and even several hundred pages of my prose. I can imagine he would have good things to say about ‘Lucifer no. 3’, but only if I wore it. It is, after all, one helluva perfume!

As for what he wears…you’ll just have to guess a little longer!

According to Damien Bàsh’s own notes from his website, ‘Lucifer no. 3’ is an all-natural perfume. It is becoming increasingly hard to find, but Sündhaft in Munich carries the entire line.

For a review of ‘Lucifer no. 3’ you can’t afford to miss, I refer you to the glorious Vanessa of Bonkers About Perfume, who was also diabolical enough to send some perfumed perdition to me…

Image: The Devil, by Niki de Saint Phalle, from the Tarot Garden in Garavicchio, Italy.

Imagine – a film noir Friday night in November, with rain-slick streets full of people out for a good time, the kind of Friday night you just know something will happen. You can taste the possibilities in the air.

Imagine a woman – not old, not young, disillusioned with her life and all the hopes she has been forced to leave behind her, sitting in a near-deserted blues café in Copenhagen over a glass of mulled wine near midnight, thinking about the one-knight stand she just left. She’s also thinking about the one thing that gives her any hope for a future of her choosing, thinking about making that hope a reality. But if she knows anything, she knows the deck is stacked against her. She’s too old, too jaded, too guarded against the vicissitudes of life to really, truly believe in that one, last hope.

She can smell it.

The perfect recipe for trouble!

When I wrote a nothing little short story called “Midnight at the Crossroads Café” some time ago, it happened by ghostly dictation. I sat down in front of my laptop with an itch to write, inspired by a picture that really got my motor running – and wrote. I didn’t think, didn’t analyze, didn’t weigh my words at all. Somewhere along the line in the two hours it took to write it, the Devil’s scent arrived and never left, weaving the seductive trail of its character in and out of the storyline that followed just as other perfumes did, because that’s the kind of woman the protagonist is and that’s the kind of woman I am, too.

I’ve been hunting for that scent ever since. In that quest, I came across Andy Tauer’s “Incense Extrème”. One of the ultimate incense scents along with the Comme des Garçons line, so the story went, and it went on the shortlist of Things To Try.

On a trip to Copenhagen, I drove my sister nuts by hauling her to a shop and proceeding to try out the Comme des Garçons incenses – Avignon, Zagorsk and Kyoto. I liked all of them, but they were too…orthodox in their approach, too literal in their interpretation. They are all exceptional incenses in each their own ways, but no Devil resides in those bottles, no intimations of taboo drip from those liturgical nozzles of sanctity.

Incense Extrème shares the same evocative sense of sacred space with its three cousins, but I’m delighted to say there’s nothing in the slightest liturgical about it.

In this cynical age, we’re all too likely to forget that for our ancestors, incense was what divinity…smelled like.

With that first, potent spray, Incense Extrème takes you…there. Not beneath the soaring Gothic arches of some venerable cathedral, but there, far out in the desert beneath the light of a million stars, the sands whispering their nocturnal secrets as an old, spiky Boswellia bleeds its fragrant tears.

This is no shy, retiring incense that flirts and hints before it retreats, yet neither does it bludgeon you with dogma as the CdG’s are apt to do.

Like the tree that is its focus, Incense Extrème is timeless. The cedar and juniper, the coriander and a suggestion of petitgrain leap out of the bottle shocking you awake and aware. Orris is listed as one of the notes, but if that’s true, this is no relation to any other orris I’ve been privileged to meet. No carroty, buttery iris, no suggestion of anything the slightest bit floral. Instead, that radioactive cedar/juniper blend evolves from an aria at the beginning to a low, vibrant thrum, underpinned by a bitter, smoky labdanum and ambergris that keeps the incense floating and weaving throughout the top notes all the way to the far drydown that doesn’t arrive until a good six to eight hours later.

It is linear but not boring, dry as a desert wind, and thanks to that cedar and juniper, the brittle green-brown of desert sage. Very contemplative and serene, in fact I’ll go so far as to say this is my kind of chill pill. Wearing Incense Extréme, I can handle nearly anything life might throw my way.

Yet it is not the Devil’s scent. It’s very clean, very refined, very…civilized. With a touch of animal, slightly less cedar and more labdanum, a faint but distinct whiff of, well, goat, it could have been.

I don’t care. For the days when I need stainless steel armor for protection, for an evening I need serenity, for the nights I need to focus, I need Incense Extrème.

Yesterday, if I can get it!