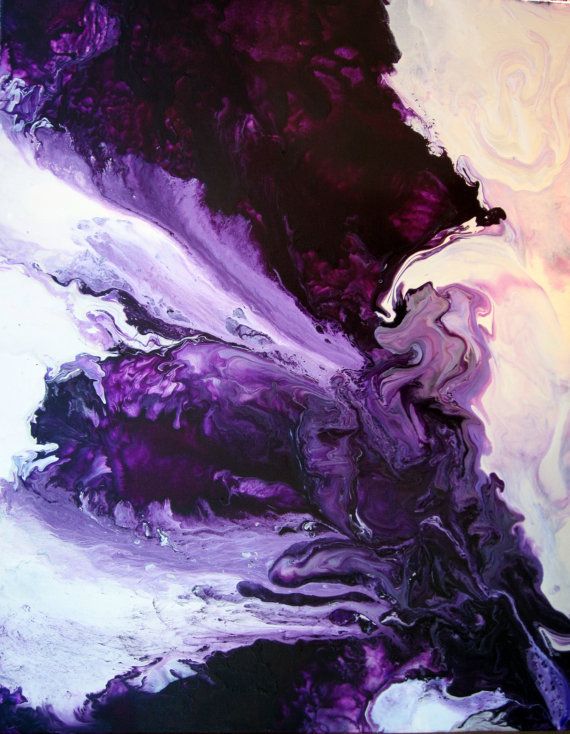 On my way to /school every morning, the train passes through a series of beechwoods that line a deep river valley – the ‘deepest’ (we’re not talking a gorge here) in Denmark. And every morning, I keep my eyes peeled for the sheltered, south-facing spots beneath the trees and under the bracken, a telltale patch of tiny, round, emerald leaves. From what I’ve seen, it won’t be long before one of my personal favorite things about Spring arrives – the tiny, unassuming and deeply fragrant wood violet.

Pity the poor violet. Already, I’ve written unassuming. One hundred and twenty years ago, violet was arguably one of the most popular soliflores, adored by dandies and debutantes, grandes dames and ingénues alike, for its innocence, its lack of assumption, its sweet, green floralcy, and if not the violet, then its leaves, exuding grass and haricot vert, both flower and leaf containing the promise and the deliverance of spring.

I’ve loved violet for a long, long time, ever since a wax sample of Bois de Violette landed on my desk and for all its autumnal woody swags and flourishes, it brought me back in an instant to the beechwood floor and a tiny, purple-white bloom.

Violets and roses share common notes, and in combination give us the impression of expensive lipstick. Later, the heartbreaking violet note in another Lutens/Sheldrake creation, De Profundis, came along to blow my proboscis to smithereens, and yet another passionate violet-tinged love affair began, before I was gifted with a vintage mini of one of the greatest and grandest of them all, Germaine Cellier’s Jolie Madame for Balmain, which not only brought back indelible childhood memories of my mother’s perfume and the fur coat it saturated, but just about did the adult perfume writer mein, for being so perfectly rounded, delineated and composed.

You may have Guerlain’s Après l’Ondée at the top of your purple passions (I haven’t spent nearly enough time with it), but for me, Jolie Madame is at the very top of my own as one of the three Last Words On Violet(s).

It may be that to your mind, violets skew feminine or girly. Not so. Oriza L. Legrands Violettes de Czar is a very elegant, nostalgic and highly refined masculine, broad-shouldered violet that all but twirls its metaphorical Edwardian moustache, and if modern violet is your jam, I recommend Mona di Orio’s staggering Violette Fumée, an easily unisex, surprising twist on everything we thought we knew and not a few things we didn’t – about violets.

We have Italian violets in Borsari’s Violetta di Parma, and the sugary, sweeter violets of Toulouse in Berdues’ violet perfumes.

To the extent they have any common denominator, it’s that these violets – all of them justifiably famous violets – tread lightly on the ground. These are not insistent violets so much as insistently – and consistently – great violets, each with their own qualities, profiles and personalities.

Then came Insolence. If it came with an epithet, I could call it the Beast (of a) Violet.

Insolence, created in 2006 in a collaboration with the great Maurice Roucel and Sylvaine Delacourte at Guerlain, began life as an eau de toilette, and went on to encompass seven different flankers, one of which is the bottle now sitting on my desk in its dark purple bottle – the eau de parfum.

The eau de toilette – despite all our wailing that Guerlains no longer have any longevity (debatable) whatsoever – was a raspberry-violet-orange blossom bombshell with jaw-dropping sillage, created like most Guerlains these days for the ‘modern young woman’, but no ‘modern young woman’ – I personally know fifteen below twenty-five who fit the bill – would ever dare to be quite so … audacious in these perfume-phobic times. They’re all about blending in, whereas I am far past caring, and by Golly, if I want to be audacious, then audacious it is, and let them think what they may.

That attitude may be why I finally pulled the trigger at an online discounter last fall and bought a bottle of the eau de parfum in the ‘dirty dishes’ Serge Mansau bottle, and to hell with all consequences.

The first surprise was Ms Hare, who heard herself saying: “But this is good!” Later that same day, when I confronted the Dude with it, the second surprise was his reaction: “That smells delightful!”

Delightful? Seriously? Have I become so accustomed to perfumery avant-garde that I’m shocked when my immediate surroundings actually like my perfume?

Well … yes. Because it took me – a perfume writer these eight years and counting – not a little time before Icame around to Insolence. It was a bit like your first trip to the beach after an endless winter. You know the water will be cold, so you take in the ocean one toe at a time before diving in. For a long time, I took in Insolence one teeny spray at a time for fear my neighbor, the check-out girl, my study group, my teachers, the canteen ladies and my entire class of teachers-to-be would complain.

An inappropriate TL; DR way to describe Insolence compared to the rest of the Guerlains would be this:

Imagine Après l’Ondée has had her heart broken –again. One fatal night, she downs an entire bottle of 180-proof methyl ionone in her despair, and calls up her BF Tonka Imperiale, who drops everything and comes running over, all friendly concern, TLC and one forlorn, secret hope. And that was a whole bottle of 180-proof methyl ionone. Nine months later, Insolence arrives as a souvenir.

Accurate or not, this is not how perfume writers are made.

Insolence starts her life with a fog horn of an opening. I do mean – fog horn. Violet – this one is emphatically not shy, not unassuming, not, in short, anything like any violet tropes you might think you know, but loud AND proud – is hitting up the town with her friends raspberry and orange blossom, and this night of all nights, they’re all more than a little … tipsy. By the time iris and tonka bean arrive to chaperone them home, violet is still dancing on the tables to hoots and acclamation singing Piaf as she does into the table lamp, raspberry and orange blossom have long disappeared with two highly disreputable gentlemen, and everyone wakes up with a hangover the next day.

The iris adds deep, powdery facets, but we’re nowhere near baby powder territory here, this is a hard-to-obtain-even-in-Parisian-pharmacies face powder, which makes me suspect a smidge or two of damask rose deep within those purple depths. Some long, long time later, that violet is still in party mode, dancing her pas-de-deux with tonka bean, somehow becoming more true to her sweet, woody origins.

If Insolence contains any Guerlainade, I’d be hard-pressed to detect it, but being a Guerlain, crème patisserie always underpins the whole. It’s sweet, but not quite cloying, not quite over the top, not quite entirely… vulgar. It walks a line between extreme sophistication (I’ll get back to that) and outright brash vulgarity, but lucky for us, never dives all the way in.

Which brings me to my other main peeve.

Whoever among the marketing department of Guerlain came up with ‘modern young woman’ (because screw les femmes d’un certain age) should be shot on sight – or sniff. Just as I’d never recommend L’Heure Bleue to an ingénue, I hesitate to recommend Insolence to anyone below the age of twenty-five. It takes a kind of audacity to wear only achievable by age, and a degree of sophistication obtainable only by experience to appreciate. So I’ll go with ‘modern woman’, and ingénues need not apply. One way and another, I came around to Insolence, for all I wanted to loathe it. It’s precisely that tightrope between sophisticated and vulgar I so admire – and precisely why I think it’s brilliant. That too, is not something I’ve had to say about any newish Guerlain in a very long time.

A word of caution. If the eau de toilette was a bombshell, the eau de parfum is a violet H-BOMB. Meaning a little goes a l-o-n-g, long and LONG way. Three sprays have been known to last a full 16+ hours, something I’ve only experienced with certain extraits, most Tauers and all Amouages. The violet remains from topnotes to base notes, and that’s another first. Don’t wear this to a fancy dinner, darlings. Or if you do, apply lightly. Bring a decant. You can always apply more before hitting up that club, where you’re known by another name.

The Violet Tsunami. Take care it doesn’t sweep you, too, far, far away.

Insolence was originally created by Maurice Roucel and Sylvaine Delacourte for Guerlain in 2008. Available at perfume discounters, but be aware of the bottle – all previous Guerlain eaux de parfums in bottles of separate design are since 2017 sold in the “bee” bottles. I own the purple “stacked dirty dishes” edition shown below. Comments on Fragantica claim Insolence has since been reformulated and is now weaker and less tenacious. 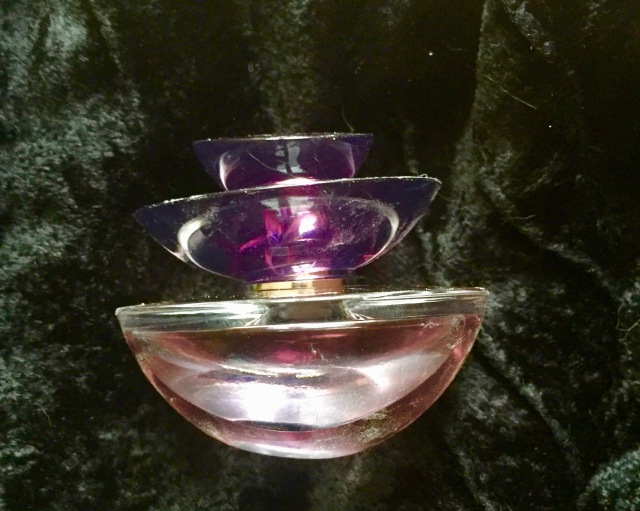