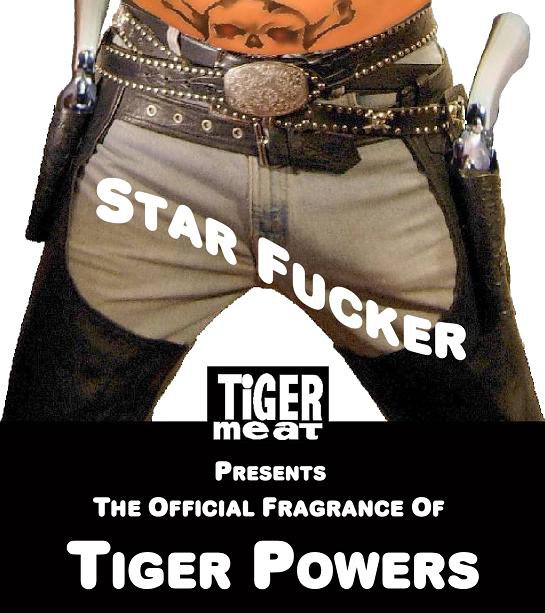 – a review of Tiger Powers’ ‘Starfucker’

Once upon a time, it took merit to become famous. To become famous, you needed either the merit of a happy genetic accident, the merit of talent and accomplishment, or else just the undeniable merits of a perfectly matched pair of 34DDs.

These days of course, it takes nothing at all. These days really is the infamous age Andy Warhol (pretty celebrity-obsessed himself) foretold, of fifteen famous minutes for everyone for absolutely nothing at all, although it usually helps to be good-looking, whether or not you’re able to back that up with some other…talent.

Don’t believe me? Two words: reality and TV. Feel free to insert your own horror stories here. I rest my case.

And yet. And then. And then again, there’s Tiger Powers, Hollywood fetish model, musician and face of Opus Oils, and who is one of only two exemplars of the masculine gender whose mere image is enough to completely distract me from whatever it is I happen to be doing at the time, despite being neither short, balding, over the hill or from New Jersey.

I first encountered the chameleon charms of Tiger during a fit of serious indecision of a kind unique to fumeheads and perfume bloggers – when I browsed Opus Oils’ website looking for samples to order. Mind you, this was well before I even sniffed Kedra Hart’s marvelous creations, and as if indecision weren’t enough, suddenly I had to open my windows, because either my geriatric PowerBook was overheating or I was.

Certainly I was by the time I reviewed ‘Dirty Sexy Wilde’ and as if the perfume weren’t quite incandescent enough, Tiger channeling a devilishly delicious version of Oscar Wilde was no help. At all.

So I next really put my laptop in it when I concocted the idea of a perfume story for the lovelies known as ‘Les Bohemes’ and made Tiger the star attraction and instigator of a time-travelling night and Hollywood party to remember. In not one, but two installments!

Some time later, I received a garish envelope from Tiger containing his new, signature release…and lo and behold, it’s named…Starfucker. Not only does this new scent have about the coolest name ever (because I’m that kind of post-punk arrested development imp), it brings with it absolutely no associations of any kind of night that starts with free champagne, access with a VIP and a limo ride and ends with a brutal early morning reality check in the far reaches of condo hell in Marina Del Rey.

Tiger Powers, let’s not forget, is so much classier than that and would surely never do such a thing. Call me a dreamer, but I know I’m right!

This little sample vial is instead Essence de Tiger, down to and including – so the press release states – samples of Tiger’s DNA…blood, sweat and tears. Fancy that – a Tiger you can clone!

So how is it? Is it rock’n’roll and sin and perdition? Deviously devastating? Is it outrageously good-looking, packed with illegal quantities of feline charm and urban jungle camouflage stripes under the Klieg lights? A weapon of mass seduction?

The short version: no, yes, yes and absoeffinglutely! Arrange them as you please!

The long version is a long, drawn-out sigh of…oh, thank you, thank you, thank you! If you have fond memories of the former glories of such immortal classics as Dior’s Eau Sauvage, which was a summer staple for me (too) long ago, or Acqua di Parma, which my late beloved stepfather wore and I will forever associate with class, wit, and all arts manly, then Starfucker is so easy to love, it’s ridiculous, precisely for not being what you might expect from an icon like Tiger Powers.

Instead, it sashays out of the bottle on a California sunbeam of effervescent fragrant fireworks, the kind that smiles a mile wide and shines down upon you as you bask in that summery glow…well hello how are you, it seems to say, and suddenly, your heart skips a beat and you really, truly do believe – in spite of all your lifelong cynicism has taught you otherwise –that anything at all can happen, and whatever happens, it will always, but always be good, even if you have other ideas.

Should you have other ideas, they’re not too far behind, either, when that swellegant lavender, jasmine and sandalwood make their star appearance and turn in the spotlight, and by the time some long hours later when life’s a beach and that’s all you need, that’s precisely where you’ll be, dipping your toes in the sunset Pacific wrapped in the beachiest, sexiest kind of happy drydown. You, yes, you too can devastate the diehards and slay the unsuspecting with Starfucker and they’ll never have a chance to do anything at all but surrender to your charm.

Meanwhile, as I frantically reassemble my neurons into something resembling a brain and a readable review, I’m, well, sold. Sold on the idea of wearing this with a vengeance, like so many other of Kedra Hart’s fragrant fabulosities, sold on the teenaged thrill of telling people what I’m wearing since I haven’t evolved that much past the age of tongue-in-cheek, and utterly sold on the vicarious thrill – truth? Fiction? – of wearing someone else’s DNA…so long as it’s DNA worth wearing. I won’t do that for just any ol’ Joe Schmo…

Mount Rushmore in twill on a California beach.

Tiger Powers’ ‘Starfucker’ is available as Eau de cologne, bath and body oil, body lotion, body butter and bath salts from the Tiger Powers website. At mind-blowing reasonable prices for something so good!

Ever since a boring, windy November night almost two years ago, my dreams have been haunted by a phantom….perfume. A perfume I have never encountered in real life, never even thought about before that night I was visited by a relation to Edgar Allen Poe’s Imp of the Perverse and fell down a rabbit hole of my making.

See me as I was that Friday night…thoroughly, emphatically bored. Some idea bubbled away at the back of my mind, something nailed my posterior to my Balinese cane chair and sent me looking for an image I came across a few days before, something made me drum my desk as I looked and thought that heretical thought…

“What if” is how stories are born, books are written, things…happen.

I plugged into my iPod, unplugged my inner censor, and wrote a story about a woman much like myself with nothing to lose, a woman with a dream of doing and becoming – and the Devil in disguise in a midnight café who makes her an offer not even she can refuse. Woven into the storyline in a way I wasn’t even aware of doing was…that phantom perfume, the Devil’s scent, dark, erotic and dangerously alluring. It weaved and bobbed throughout the storyline that followed, as warning and premonition and button pusher, and the Devil that I conjured knew everything about pushing my protagonist’s buttons – good and bad.

Since then, I’ve often asked myself when I sniffed something new…would this be it? I have a current project – in dire need of resurrection at present, I freely admit – called the Devil’s Scent with Doc Elly of Olympic Orchids, I’ve met a few candidates…but none of them came so close to that olfactory image in my mind as Kedra Hart of Opus Oils did with ‘Dirty Sexy Wilde.’

It’s all Carrie Meredith’s fault. Without her reviews of Opus Oils and my own relentless curiosity, I would never have known. ‘When you get your samples, girl, I want you to pour half that vial of ‘Dirty Sexy Wilde’ all over yourself and let me know what happens’, she wrote me in an email.

So when they arrived after over a week of anticipation that nearly killed me, that’s exactly what I did. I’m so glad I was alone that Saturday, or my sanity would have been in question. The only word that bears repeating (this is a perfume blog, after all) is…OMG!

‘Dirty Sexy Wilde’ is Kedra Hart’s ode to Oscar Wilde and Dorian Gray, both of whom are very, very dear to my writer’s heart, so with a name like that, there’s something to live up to – an aura of Oscar’s rapier, elegant wit and verve and that underlying hint of horror that lurks between the lines of ‘A Picture of Dorian Gray’.

Before long, that fatal combination of tobacco, oakmoss, coumarin, musk, civet and ambergris – a blend that surely equals ‘sexy beast’ if anything does – makes itself known in no uncertain terms, and it moves far past anticipation and well into bedhead territory. Dirty. Sexy. A night to remember.

As my nameless protagonist says in QD of the aftermath:

My brain wasn’t located until Friday morning. I felt like a major railroad disaster.

‘Dirty Sexy Wilde’ is a major railroad disaster perfume, in the sense that it practically evaporates inhibitions and distills desire with a capital D to a sharp and shining point. It isn’t obvious, yet it’s not understated and it’s perfectly balanced and flawlessly composed for what it is. I call it Eau de Perdition.

Your idea of the Devil’s perfume might be different, more understated, a touch less, well… animal. Since I wrote QD, I know my Devil well, and I tell you from the bottom of my black and highly depraved rock’n’roll heart…

My Devil would wear this for his first encounter with my protagonist at the Chelsea Hotel, he would wear it to burn away every last shred of doubt or inhibition she might have, every objection she could hold, and every onion layer self she would want to peel away forever. And he would wear it again much later, when he says:

Until there is nothing more to say, not vertical, not in words, not in anything other than the language she and I had spoken from that very first moment in a café at midnight. This one. This skin, this touch, this scent, this mind, this woman, this dissolution, this mouth, this conversation. Oh, yes.

As for this lowly perfume blogger, desperately trying to write a semi-coherent review, I can only be grateful I have yet to encounter it on either my Devil or his lookalike.

If I ever did, I’d eat all three of his femurs alive and entire, more than once, and by Golly, he’d walk differently the next morning!

As it is, I’m so very, very grateful to Kedra Hart for putting my Devil into Dirty Sexy Wilde. For which I can only thank her from the bottom of my black and depraved rock’n’roll heart!

‘Dirty Sexy Wilde’ is available in many permutations from perfume to bath salts from Opus Oils.

Image of Tiger Powers as ‘Oscar Wilde/Dorian Gray’ used by permission of Opus Oils. There was a picture of Oscar that I found, but Tiger’s was so much better!