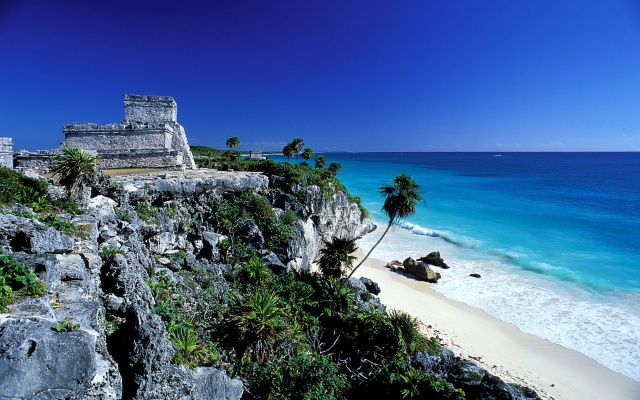 Of all the many memories we pack into our luggage on leaving foreign shores and returning home, none are so evocative as the scents and smells of place. Whether the fishy, invigorating tang of saltwater and iodine in a Nordic city harbor, the assault of the spice market in the medina of Marrakesh, the lemon and orange-redolent Amalfi coast or the coconut, Coppertone and frangipani-soaked Caribbean recollections of my own peripatetic childhood, you can close your eyes to remember – and you are there all over again, wrapped in both the atmosphere and the mood of a time and place.

Such a memory was also the inspiration for Karl Bradl of the storied Aedes de Venustas store in New York and for a 2014 addition to their eponymous line of fragrances, Copal Azur, this time inspired by the salt air, the cerulean hues of the sea, the powdered-sugar sand of the beach and the ever-present perfume of copal incense in Tulum, Mexico.

In Central America, copal incense – sometimes but not always the resins of several species of Bursera tree – has been used since the Mayan era, as a natural mosquito repellant, as food for the Gods, to cleanse sick bodies and dispel evil spirits and as a natural glue for leather, ceramics and woods. Because several tree resins are described as “copal”, copal notes in perfumery are often reconstructed with other materials, mainly frankincense, whose odor profile greatly resembles it.

As incense is the common theme of the Aedes de Venustas’ line, it makes absolute sense that the perfumer who first put incense front and center with Comme des Garçons’ ground-breaking 2003 Avignon would be perfect to recreate the ambience and entire atmosphere of a sacred scent the Mayans called pom.

Bertrand Duchaufour began by using three types of frankincense to capture the many facets of copal. Although the press release doesn’t mention which ones, this frankincense aficionado is going to hazard a guess and say Boswellia sacra, or Somali frankincense, with its pronounced cold, spiky, dark green pine-y note, Boswellia carterii, or Omani frankincense, which is sweeter and softer with floral lemony sorbet undertones, and Boswellia serrata, a frankincense native to India, which is sharper and dryer. Having said that, they’re so seamlessly interwoven you’d be hard-pressed to tease that first emphatic burst of incense apart, and it took me several tries and my frankincense olfactionary to realize it.

Copal incense is front, center and in the spotlight in Copal Azur, but that’s just the headline, because this incense comes with a twist of salt and sea spray, just enough to remind you this is not-your-usual-incense. As it moves into the heart and base some time later, softer, warmer and sweeter fumes rise up to greet you, a delicately green-flecked tonka bean burnishes the incense with its own sweet vanillic fumes, and over 7+ hours later, exudes its final breath in a puff of patchouli, myrrh – and copal incense.

Like the five other fragrances of the Aedes de Venustas line, Copal Azur is easily unisex if you’re an incense lover of perfumes such as the aforementioned Avignon or Serge Lutens’ L’Eau Froide. I’d wear this at the drop of a charcoal tablet (because I’m easy!), although some might find the opening blast of monumental incense skews it much more masculine than feminine.

Mainly, though, Copal Azur strikes me as the very best kind of olfactory postcard – or scented place memory? – by painting not just the tropical ambience of Tulum itself – the tonka-bean marzipan vanilla sands of the beach, the salty ozone of a scorching, impossibly blue, limitless sea and sky, the cardamom-green of the jungle, a distant patchouli growl of a jaguar and towering above them all, the monumental Mayan temple complex in all its steely gray-white majesty, conjured by a shaman out of sacred smoke – and incense.

I wish I were there! Disclosure: A sample of Copal Azur was sent for review. With thanks to François and Olivier.