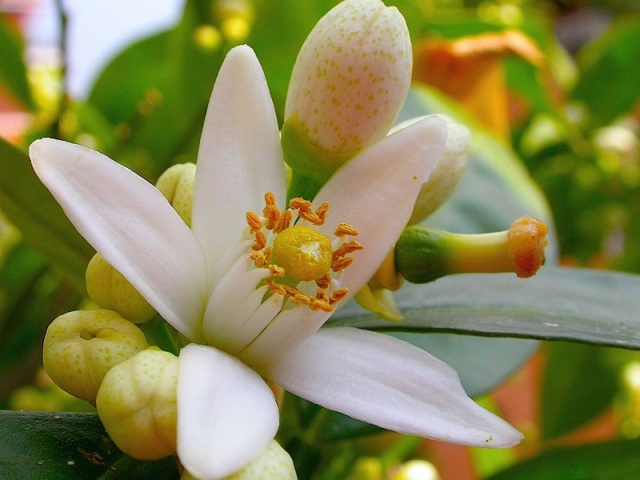 –  a getaway vacation into the heart of a favorite flower

Of all the many fragrant memories of my South Florida childhood, one in particular has stuck in my mind and stayed with me even today, as a redolent symbol of all that is …happy.

I was ten or eleven at the time, and it was a day I had forgotten my house keys, so I had to wait in the back yard for my mother to arrive home from work. It must have been late March or early April, for the citrus tree orchard in our back yard was in full bloom. We had grapefruit trees, lemon trees, lime trees, and a stand of orange trees that stood at least twenty feet tall. They all required careful navigating to climb – those trees had spiky thorns – but I had long since found a path up the trunk and onto a favorite branch, and that’s where I chose to wait.

It was a heady late afternoon out there beneath the orange tree canopy, the slanting sunlight beating down upon those trees from that breathless blue Florida sky. Everywhere around me, the no less heady, nearly narcotic fragrance of orange blossom in all its many shades…the soapy floral, the hint of the orange zest behind it, the thick, sensuous, indolic aspect that somehow stupefied me to such an extent I have no memory of how long I sat there, only that as I sat on that branch and waited, I was aware of only one thing – the simple joy of breathing in, of inhaling all that was supremely beautiful and supremely happy, which was precisely how I felt.

No matter how much my life attempts to drag me down and chew me out, nothing, but nothing makes me happier in an instant like orange blossom.

A while ago, I posed a question on one of the Facebook fragrance groups about orange blossom. We generally agreed on the orange blossom gold standard  – my absolute favorite orange blossom, which is Serge Lutens’ Fleurs d’Oranger. This is the orange blossom I recall from that afternoon that burned itself into my memory, the rose, the jasmine and the tuberose somehow all adding up to all the nuances contained in that one fatally fragrant blossom – and the cumin (a deal-breaker for some) adding its own intimations of carnal intent. This is no blushing ingénue orange blossom, this is an opulently sensuous creature in full bloom beneath the orange trees, just waiting to lure you in…which might explain why I’ve likely ‘wasted’ a good portion of a bell jar spraying it on my pillow before bed. Sweet dreams indeed!

But there are other orange blossom specials, and here they are for your delectation…some famous, some not so much, some innocent and flirty, some of them not quite so innocuous… 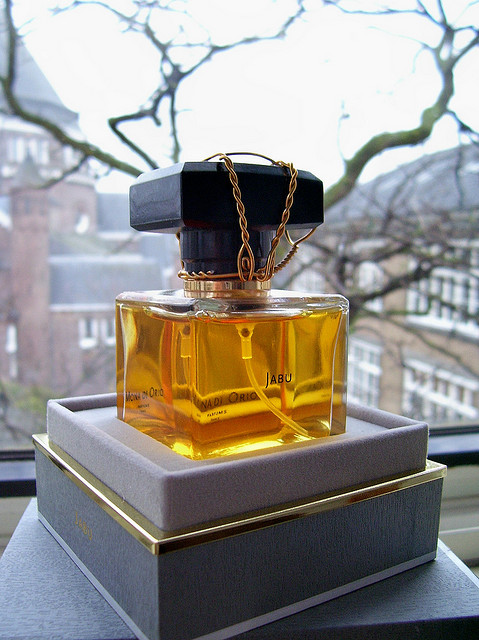 Jabu – the Zulu word for ‘joy’ – was created in 2009 by the epically talented niche perfumer Mona di Orio, who tragically died last year. No tragedy lurks within ‘Jabu’, which was made to benefit the Dutch charity ‘Orange Babies’ for African HIV-positive mothers and their babies. Jabu is a glorious, complex, grand, glowing Oriental of an orange blossom, from its laughing beginnings of petitgrain through its honeyed, swirling heart of orange blossom, rose and coconut all the way to the feather-soft drydown of benzoin, myrrh and sandalwood. Coconut can be a deal-breaker for me, but here, I have no complaints – everything works in perfect harmony, and everything spells precisely what it says on the bottle – which is…joy. It is virtually impossible to be blue when wearing this, and if that’s not an accolade, what is?

Jabu – in the ‘main’ collection of Mona di Orio perfumes – will be re-released along with the other perfumes in Mona’s main line in 2013.

If every luxury perfume brand needs a Great Big White Floral, then 24 Faubourg is surely Hermès’ contribution. Made by Maurice Roucel in 1995, this is a unique throwback to those elegant, supremely French perfumes of yore when ladies who lunched wore couture, carried Hermès bags, and wore fragrant statements that left an emphatic presence in the room behind them. Make no mistake – this is no ingénue orange blossom, this one is all woman, and she roars even when she whispers! It starts with a seamless fruity-floral effervescent blast – there’s no other way to describe it – and then. And then, it grows. And it glows. And it grows. Blooming into a luscious, lilting blend of thick orange blossom, gardenia and jasmine, with black elder adding its own earthier segue to its chypre-tinged drydown hours and hours later of orris, sandalwood, amber, patchouli and vanilla. I really don’t do it anything near the justice it clearly deserves when I wear it barefaced in my leopard-print pjs – 24 Faubourg somehow demands a flawless maquillage, great hair, grand clothes and high heels – something to accentuate its stunning sillage, outstanding longevity and eternally stylish structure. Wear it for when you want to make a definite impression no one forgets in a hurry! Preferably with Louboutin heels, but Manolos might do in a pinch…

There should be laws against limited editions I only discover after it’s way too late to do anything about procuring them. But on the other hand…what wonders would I miss? L’Artisan Parfumeur’s ’s special edition tribute to an exceptional Tunisian orange blossom harvest is what. L’Artisan puts the orange blossom – one spectacular orange blossom – front and center of this composition by Anne Flipo, and it’s all orange blossom, all the time! Lush, flirty, ripe, borderline naughty orange blossom, neroli, petitgrain – it’s the whole tree and all the flowers, too – and it’s glorious – and gorgeously linear –  stuff. If I have any complaints – apart from being nearly impossible to find any longer – it’s that it doesn’t last nearly long enough to suit me, which only means that one bottle will be too many and two not nearly enough!

In my fevered imagination – all evidence in my life to the contrary – I have what I’ve come to call ‘perfect moments’ – those fantasies of being somewhere infinitely glamorous, wearing something equally devastating, standing on a balcony overlooking the limitless blue Adriatic with a Bellini in my hand exuding effortless ‘du chien’, a French term that implies something slightly better, cooler and much more fashionable than mere ‘chic’. Chic can be acquired with a little help, ‘du chien’ is something you either have or you don’t. Needless to say, that never happened. Yet if any perfume takes me ‘there’ to that balcony and that fantasy, surely it’s Dior’s Escale à Portofino, created by Francois Demachy in 2008. It was one of the first remotely exclusive perfumes I ever bought for myself, and it is a very unique and uniquely summery vacation-in-a-bottle, with its entire orange tree from leaves to blossoms bottled up and tied around a milky, transparent green almond note so wrong, it’s utterly right, a while before it whispers its twilit song of darkest summery green some hours later. It could last a bit longer, this is true…but isn’t that just another excuse for another hit of fantasy? 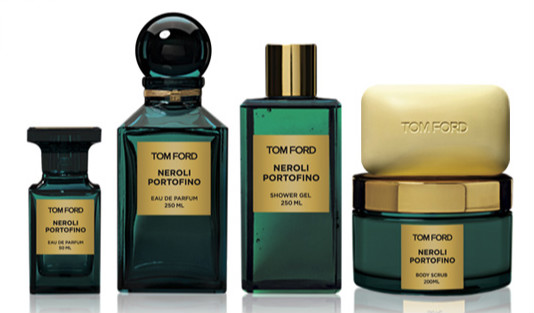 A Vial with a View

Although I can’t quite put my finger on precisely what causes it, something about the few Tom Ford’s Private Blend of perfumes I’ve tried tend to rub my fragrant fur in a few wrong directions. It isn’t that they’re not meticulously crafted (Neroli Portofino was created by Rodrigo Flores-Roux), or truly horrible or cheap-smelling, which they’re not. It could be their prohibitive price tag, or else that I’m just not a Tom Ford kind of woman. For one, I’m too short – and too busty, if not quite blonde enough. But if anything could persuade me otherwise, it just might be Neroli Portofino, tacky, tasteless advertising notwithstanding. Neroli Portofino is neither tacky nor tasteless, but instead, another tribute to the deathless, posh summer cool of Italy’s Amalfi coast, and lo and behold…you are all there with that breathtaking balcony view and all of a damn near flawless orange blossom dream yourself. Strangely enough, neroli isn’t listed as a note at all, but orange blossom – the plush, heady, slightly soapy sort of orange blossom – certainly is. It’s pretty linear from start to ambery finish, but who cares with that picture perfect Portofino view? 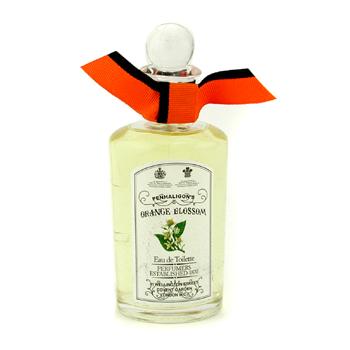 The British Art of Understatement

From the overtly stated to the softly sotto voce…Bertrand Duchaufour’s reorchestrated ‘Orange Blossom’ for Penhaligon’s is as soft and as soothing as a down duvet. It’s a light, flirtatious orange blossom that lures you in and surprises you with all the tales that can be told about ‘orange’ and ‘blossom’. It begins clean, cologne-bright and full of light – no intimations of sexpot here, or so you surmise – but that’s nowhere all it is and not at all where it stays as it evolves past those squeaky-clean beginnings into a pas-de-deux of petitgrain and cardamom, tied around an orange blossom that seems more neroli than ‘orange blossom’ to my nose. It’s understated, never obvious, and supremely suited for the mood of summery, flirty and light-hearted laughter that seems to go with long, sunny days and warm, delicious nights. You won’t be knocking anyone over with this, but you won’t overwhelm with your presence either, and that sometimes has its own undeniable appeal. I’ve loved it and worn it when other orange blossom perfumes might seem a bit much in the heat – in other words, when understated is precisely the kind of statement I want to make!

Many fragrant multiverses lie in waiting within that simple term ‘orange blossom’. Some others I wear, adore and have reviewed include Olympic Orchids‘ ‘Golden Cattleya’ and ‘Emergence’, Andy Tauer’s ‘Orange Star’, Opus Oils’ ‘Giggle Water’ and of course, the Gold Standard… Serge Lutens’ ‘Fleurs d’Oranger’.  Coming up on the Genie –  yet another orange blossom-centric perfume, but this one is so special, it deserves its own review!

Do you have your own orange blossom moments, too?

With thanks and love to the Great Facilitators…Ruth, Carlos and Amy, for making this review possible, and the many comments to my question on my favorite FB group! ❤