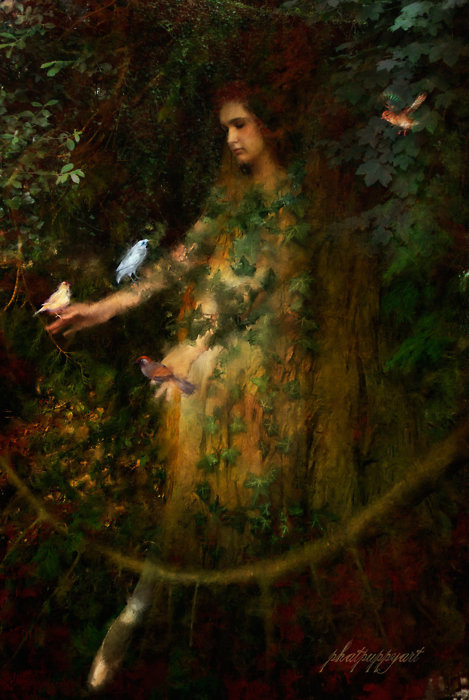 – a review of Papillon Perfumery Dryad

Once upon a time some long time ago, in a house on a hill, lived a little girl with her parents. Daddy left every morning for work, Mommy had other preoccupations, and the house was so isolated, she had no neighboring children to play with. What she did have was the wood that surrounded the house on either side, and the imagination to fill it, with characters she heard about through the stories her mother read to her. In the beginning, Teddy the Bear stood in for handsome princes from fairy tales, and Raggedy Ann for all the princesses in peril, and sometimes, she would recreate a favorite story of another little girl, who lived alone in a faraway land with a monkey called Herr Nilsson, and was strong enough to lift her own horse.

But soon, she discovered other characters – the animals who lived there. The birds chatting in the trees, the squirrels who would eye her in the autumn as they came down from the trees to search for acorns and hickory nuts before deciding she was no threat to them, searching onward for their winter stash. The crafty raccoons who stole leaf-wrapped peanut butter sandwiches when she wasn’t looking and sometimes ventured close enough to talk and make her laugh at their antics. The foxes that eyed her from a safe distance and carried on dancing with their cubs, barking when they ventured too far for safety.

Towering above them all the green canopy of trees; hickory, maple and birch, wild pear, cottonwood, fir, larch and oak. She would watch the sunlight through the leaves in spring as it found the forest floor, the motes of pollen whirling towards the sun, and notice how the greens shifted through the seasons; from the spring green of her favorite crayons, to the richer, darker greens of high summer and the inky greens of the fir trees, through to the crimsons, oranges and golds of autumn, when the wild pears offered up their fruit, with the tough, bitter skins hiding a juicy-sweet treat, and next, the trees stood bare and unadorned, sleeping like the black bears she would also sometimes see. But as time went on and the little girl grew, she chatted less and listened more.

For the trees were talking, to each other and sometimes, to her, in slow, sonorous rumbles and whispers on hot, sleepy summer afternoons, and in excited, proud rustles showing off their spring finery, in melancholy, sleepy sighs on blustery, rainy autumn days, and in the occasional creak and shift of roots as winter went its way.

They were alive, this she knew, knew it in her very bones, alive precisely as much as she herself, and because she welcomed them in with no reservations, they in their turn guarded her, as she brought flowers she picked and laid by their roots, and sang for them songs she knew to sing.

The wood was her joy and her refuge when Mommy told her ‘no’, when Daddy was away too long, when the world outside the wood was less than kind to imaginative little girls.

That little girl was me some very long time ago, in a small wood across the ocean and far away, from a time I thought I had forgotten.

Except I never did. To this day, the forest – these days, it’s the beeches that surround my town – always, but alwaysgives me joy. Today, we even have scientific proof of what that little girl always knew – trees do indeed communicate in highly sophisticated ways, if only we people would learn to listen.

In that winding, whirling way of memory and emotion, in ways not even I can entirely articulate, Papillon Perfumery’s Dryad took me back in an instant to that early childhood memory, to the happiness I always felt there, and to those unforgettable trees.

Whether through the strength of those memories, or simple inclination, I am a Green Fiend. These nearly nine years of perfume writing have expanded my tastes to an increasingly catholic degree, but somewhere near the bedrock of my soul, a green burns with an emerald fury, and will never, ever fade.

When Dryad was released in 2017, I sat up and took notice. I cursed the UK postal restrictions that initially meant I couldn’t try it, and cursed my impecunious circumstances that ruled out buying a sample from elsewhere. There was somethingabout Dryad, I knew it in my bones, something I needed, something I had been seeking forever and never entirely found.

Well, I thought, singing along with Mick Jagger. I couldn’t always get what I wanted, but I got what I needed.

Until that fateful day a wonderfully kind, generous Perfume Fairy, or else one of my patronesses Freyja or Danu whispered in her ear, decided I needed to try Dryad. It came about in a perfume group thread, and lo and behold, on my otherwise not-at-all-spectacular birthday (exit the Dude, who won’t be back), an envelope arrived, (also) containing a generous decant of Dryad.

In an instant, I was all of four again, listening to the songs of the trees.

The next day, I sampled it in earnest, sat down in a swoon on my chair, and cried, cried like I hadn’t since a tiny sample of vintage Vent Vert extrait also took me far away for other, far more grown-up reasons.

Galbanum – a resin used as incense and perfume for thousands of years – is a very difficult material to work it in perfume. It can turn bitchy and evil and monstrously green. It can be a top note, a base note or a through-and-through note. But it takes a breathtaking amount of skill to make it, as indeed it is here, numinous.

I could take you through the notes as they unfold, tell you of that effervescent, citrus-herbal opening song, tell you of its softly floral heart and an unexpected and delightful apricot kiss, I could tell you tales of jonquil, that soft, voluptuous sister of narcissus, tell you how its sweetly mossy drydown some many hours later lands you on a forest floor where nettles never sting, where ants never march and vetiver never growls. I could write of all of that, and it would not be, would never be enough. Galbanum is the heartbeat and the pulse of this perfume, and it is the end and the beginning of Dryad. Rendered as exquisitely as it is here, it is nearly my undoing.

For all my love of green perfumes, I know nothing in the slightest like Dryad. I own not a few; my beloved Chêne, Vent Vert, Bandit, Antonia, Chanel no. 19, Ivoire, vintage Lauren, the staggering vintage Jacomo Silences. Ever-greens all, and ever-loved.

They are not Dryad, are not so atavistic, nor so primal, never so wild nor so bewitching, so free or untamed.

It’s as if Liz Moores set out to capture – as indeed she did in both the name and the juice – the hamadryad, the guardian spirit of a particular tree, but not just any tree, nor just any passing dryad. This is a witchy, bottled Balanos, the spirit of an oak tree, and in that spirit are echoes of other trees in other times. In Dryad’s floral heart, she left a little of her own soul, and to my own surprise and ever-lasting wonder, I rediscovered not a little of my own.

Or as a favorite, ancient poet once wrote:

When the beech prospers

Through spells and litanies

There is hope for the tree.

A viridian voice that sings: wearing this, there is even hope for me.

With thanks and profoundest gratitude to the super-generous Tora, who made these words possible. And to the ever-wondrous Liz Moores of Papillon, whose magick conjured them out.

Papillon Perfumery Dryad is available as an eau de parfum (with 16+ hour longevity, no less, at least on me) at Luckyscent, First in Fragrance and Les Senteurs.

6 thoughts on “The Viridian Voice”