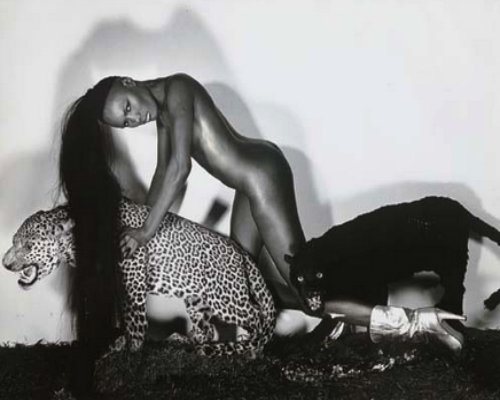 Glamour is one of those words everyone thinks they know how to define. Say that strange word; glamour…and a whole slew of associations come to mind: Vintage Hollywood, La Dolce Vita, rock’n’roll, Dita von Teese, George Hurrell and Richard Avedon photos of impossibly beautiful people in immaculate clothes improbably lit and flawlessly photographed. Glamour, we like to tell our mundane selves in our own humdrum lives, is usually something other people have in other, more rarified and luxurious circumstances, people who have that nearly inhuman ability to draw the eye in and set the imagination alight.

People, in other words, who are able by their mere persona or their photographed image to make us dream the improbable dream…that life will be perfect if just for a moment, and just for a heartbeat, we can identify with them and… sigh.

We can dream the world is our oyster and everything and everyone is ours for the taking.

You might be surprised to know the original meaning of glamour was very, very different. Some very long time ago in the late Middle Ages, the word itself came to us from Scots Gaelic via the Latin word for scholar, grammaticus, meaning one who (also) has occult knowledge of spells and enchantments.

In other words, someone glamorous…knows how to bewitch and bedazzle, and after all, isn’t that what the dream factories in Hollywood are all about?

When I think of the word glamour, a favorite phrase by a favorite writer comes to mind.

By your mask I shall know you. (Isak Dinesen)

Glamour, you see, is that bewitching mask those dream makers and imagination firestarters hide their true selves behind. We see the mask, and we think we know something of the person behind it – the performer, the actor, the mesmerizing personality that stops us in our tracks. Except that’s the whole point of glamour – that enchantment of gloss and polish and unattainable, immortal perfection.

It works as a mirror – polished to a high and silvery sheen, framed by all the artifice of art, fashion, lights, camera, action – and reflects our own dreams and longings back to us larger and more luminous than even we dared to dream. As it does, as we blink in the Klieg lights bedazzled and bewitched, that glamorous mask and the human behind it become one and the same, and so another enchantment begins as our imaginations come alive.

If anyone knows understands the precise meaning of that quote, knows to frame that mirror of glamour and create that mask in novel and surprising ways, Donato Crowley, purveyor, creator, and all-round Renaissance Man of Donato Style, certainly does.

His aesthetic incorporates large hunks of rock’n’roll, a healthy dose of Gothic sensibility, titillating sprinkles of fetish, a fascination with history, armor and intentional disguise, and a definite understanding of an old maxim and an even older secret.

All that glitters is not gold or even diamonds, but Swarovski crystals can fool the best of them. Because the secret of true glamour is…

The world doesn’t want truth nearly so much as the illusion.

His creations have been worn by (so far as I know) Madonna, Nicki Minaj, Katy Perry and Lady Gaga, among others.

In an ideal world, I’d not only be able to own his Shaman Warrior helmet (skull included) to put close to my writing desk whenever I doubt my own brand of badass, I’ve also found the perfect artist to create a certain dressage top hat of dubious literary repute…

To somehow help him bottle all of that aesthetic as well as that entire raison d’être, he chose one of my own favorite perfumers on Earth – Kedra Hart of Opus Oils.

Behold – Glam Monster. A shape-shifting, ever evolving Swarovski-studded silvery disco ball of a perfume, and trust me, that’s an epic and glorious thing.

This Glam Monster is as blinding bright as any Klieg lights at the outset, starting with the fragrant fireworks of white grapefruit and pink pepper, as fresh and delicious as a brand new It face on a tabloid cover. Yet before you have time to blink and think… “been there, sniffed that, b-o-r-i-n-g”, wait for it.

A slyly smiling gang of paparazzi drawing florals are about to arrive, and these gals take no prisoners and leave only fatal fragrant devastation in their wake. Look! It’s tuberose in all her ferocious glory, growling all the very latest and very juiciest with her new best friends jasmine and narcissus, and smoldering saucily in the background a Casablanca lily winks back at you better than even Mae West could ever muster.

You really should come up and see her sometime.

The thing is, this party isn’t over until the narcissus sings, and some long time later, she does just that with a voice somewhere between an alto and a growl, for that monster begins to stir and the oud shows its fangs before you’re bitten, you’re smitten, you’re breathless with a heady blend of oud…and chocolate.

Like all glamour, there’s something unsettling about that blend. Oud – OK. All that sexy animal/Band-Aid/chiaroscuro smoke and mirrors, the fantasms of fame and fandom, sure, I’ll happily take two of each to go, thank you.

But a dark, dark, bittersweet chocolate, too?

It’s almost too much of a grand and glorious creature, almost too much to breathe, but the key word here is…almost. It should be so very wrong, and yet it seems so very right. Perfectly poised at the bottom of a key light high, high above it all called the happy-go-lucky starburst bright grapefruit and pink pepper beginning.

I never did get a chance to utter a deathless line about Mr. de Mille. I was devoured alive and entire by a most delicious monster.

All along this most thrilling ride, I felt like no one so much as Jerry Hall in a Helmut Newton moment ca. 1975, and the only thing I have remotely in common with Ms. Hall is my hair color. At 5’1” and ‘d’un certain age’, such pleasures should never be under-estimated.

But Ms. Hare, a Leo always up for any kind of trouble, instead found herself channeling another kind of glamorous entity, the dark, sultry, feline glories of a most glam monster indeed. She caught herself mouthing the lyrics to Grace Jones’ ‘Pull Up To The Bumper’, and it took no time at all before Mini Jerry chimed in with an extra hair brush. The Klieg lights were optional. The red carpet was actually gray. We didn’t care.

We pulled up to that bumper and figured it all out.

We believed our inner glamourie…or how to be 100% …

Disclosure: A sample (of the eau de parfum, I’m guessing, since the vial didn’t say) was provided by Kedra Hart of Opus Oils for review.

With thanks to Kedra and to Donato.