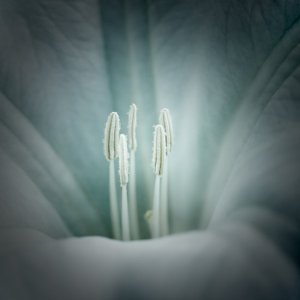 – a review of Opus Oils’ ‘Flapper’

In a side street behind the Plaza and the Palace of the Governors in Santa Fe, New Mexico lies the location of one of my biggest fragrant epiphanies – the Georgia O’Keeffe Museum. Here, in a small courtyard beyond a gallery, something stopped me cold in an instant. It was a faint scent trail of something so haunting, so evocative, so unlike anything I had ever encountered before, all thoughts of art appreciation went right out of my head. I sniffed. It wasn’t the overall ambient scent of New Mexico, with its dusty heated smell of sagebrush and broom, ponderosa, mesquite and cottonwoods or roasting chiles.

I remember that I stood, held up my hand to stop a conversation and sniffed the air like a bloodhound on a scent. Which was when I found the source.

Off in the furthest corner was a small clump of otherwise unremarkable weeds to my untrained Northern European eye, unremarkable if not for rather showy, white, trumpet-shaped flowers I instantly recognized from so many paintings. It was such a galvanizing shock to my senses – that coming together of artistic vision I knew from so many favorite paintings and a living reality blooming unheeded in an adobe courtyard – with the unreal, ghostly perfume of the humble jimsonweed, datura stramonium, quite literally fragrant like nothing at all else on Earth.

For the rest of my years in New Mexico, I would follow that trail when I found it, as I so often did…in overgrown lots and empty arroyos, nestling in the sunlight in hidden canyons in the Jemez Mountains, and always in the twilight hours when it bloomed…that visceral olfactory punch of datura.

Every part of the datura plant is poisonous. Datura brings delirium and madness, bizarre behavior, amnesia and even death. Every year, livestock die and humans too from datura poisoning. Legend has it that breathing the very scent of it will bring visions, dreams, intoxication – and obsession. I’ve been obsessed with datura ever since that first encounter in a Santa Fe museum courtyard, I’ve even met a few perfumes that attempted to recreate that fragrant flowered swoon… and all of them disappointed. Beautiful, yes, complex and heady, yes, but a rendering of Georgia’s beloved jimsonweed? No. So it was…

Until I discovered Opus Oils, Kedra Hart, her soliflore ‘Les Bohemes’ collection…and her ode to datura…’Flapper’.

Flapper, as Kedra says, is the Belle of the Les Bohemes ball…and what a belle she is! Sweetly disturbing, a little fruity, a little wild, her initial innocent aura is dangerously deceiving. I inhale her luscious perfume, and think nothing more edifying than ‘heavenly’, but Flapper hasn’t finished singing just yet.

She Charlestons fully into the room in her flashing satin heels with her flirty dancing eyes, and right when you summon up the courage to look her beauty full in the face, right about when that datura really begins to bloom beneath the moonlight, that heady, seamless bouquet that all equals ‘datura’ winks…rustles those velvety ghostly petals and you are so entranced, so bewitched, it’s all you can do to simply breathe the visions in that follow.

You have now been spancelled, you are under her spell, and now, she will never, ever let you go, and you will never, ever want her to! As she blooms, as the night grows older and the moon ever bolder, as she opens that white, haunting trumpet wider, she grows cooler and lusher, fading to a satin soft whisper of tobacco and tonka bean, white musk and vanilla, as gossamer as the moonbeams that slowly fade away with the dawn, the cool of the air closing up her petals, keeping all her narcotic, alluring secrets until night descends again.

She is called Flapper, but I would give her another name that suits her equally well, a name that for me encapsulates all she is and all she does…

So fatale, she and I suit each other very, very well. You see, we have a history, she and I…from a Santa Fe courtyard and into a memory of carefree, of happy, of dancing though the moonbeams together to entrance and ensnare all who catch a haunting trail they will never forget!

Opus Oils ‘Flapper’ is in the ‘Les Bohemes’ collection, available as an alcohol-based perfume and as a perfume oil in a fractionated coconut oil base from the Opus Oils website.