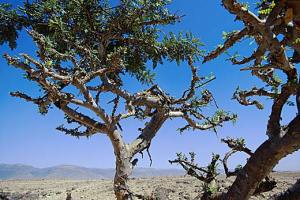 – a conversation with the Devil

Dev was waiting for me when I came home this afternoon feeling rather frazzled. Cool as anything, he pulled up a chair next to my desk and nodded toward a small black box.

“You know we have some work to do here, right?” He tipped back his chair against the wall.

“You would say that.”

“I’m a fictional character, I can say whatever I please. And I say we have some samples to look at.”

“So you’re saying that Doc Elly took the bait?”

I dug out my sample blotters. “Where do you want to start?”

“Hmm.” First, he stuck his entire nose in the box and breathed it in. “Holy…no, I can’t say that on a perfume blog. And you can’t write that, either. This is potent stuff.” He reached out for a vial labeled ‘labdanum absolute’. “Sexy! You were looking for a whiff of goat, right?”

“That’s the idea. Well, you know…it’s the animal thing. You’ve got to have a little…animal in there. You are.” I cast my beady, bleary eyes at those frankincense vials.

“Not nearly so much as you.”

“So we do.” He tipped a drop or two of Boswellia sacra and serrata onto the blotting paper and waved it under his nose. “Ummm…it needs something.” Labdanum, a touch of CO2, and a mystery labeled with a name followed by ‘Givaudan’. “I hate having to watch my language, but…oh, yeah. This is great. This is sinful.” He dug into the box. “Here’s another Ingredient X. I was excited about this one, but it’s not what I expected.” He added a drop of it and jiggled it under my nose. “So whaddaya think?”

“I think I need coffee, is what.” That frankincense was so…relaxing. I’d curl up under that desert tree any day.

“Get a grip. We have work to do.” The most incredible aroma was wafting around the room. He added a little oud. “Needs more goat.” He pulled out a vial. “Not enough. There’s labdanum and frankincense in a catfight on that blotter, and I can’t tell which one is winning.”

“My money is on the labdanum.”

“It would be. You can’t get enough of that stuff.”

“Hush. You like it, too.” I added Boswellia neglecta. “Oh, baby. I just hit the oh-zone layer. So that’s why it’s thinning.”

“And fully dressed, too!” he laughed. “So…we’re getting something like a base going here. Neglecta…is lemony. Not what I expected.” He sniffed again. “We need more sin.” Another drop of Givaudan sin.

“Any more sin, and I’ll be burned as a heretic,” I heard myself say. Already, my senses were reeling. “How Doc Elly does this, I don’t know.”

“I do.” Green labdanum absolute dripped down. That blotter should be banned, I caught myself thinking as I sniffed. It was heady. It was dangerous. It was glorious. It was very nearly the drop-dead sexiest thing I had stuck my nose in since Boxeuses. I hoped he wouldn’t wear it. I didn’t have anything left to sell.

“OK. We’ve got the rhythm now. We’ve got the bass line.” The Devil waved the blotter under my nose, and I breathed it all the way in. Danger. Dark. Devil. Oh, yes.

“Now,” he said after a while, “all we’re missing is a melody line and a lead guitar…”