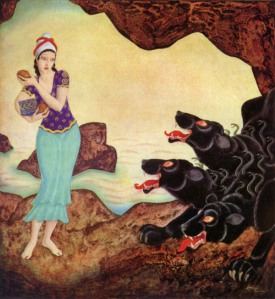 In the unlikely event anyone has been wondering, I have not forsaken you! As the snow has thawed, I’ve been snowed under elsewhere, and 36 hours in a day are just not…enough. This is not at all the same as saying I’m going to wimp out – so instead of a new perfume post, I’ll give you a sneak preview of what’s in store!

I know I’m on the road to perdition when…I spent the better part of an evening yesterday on First In Fragrance’s website, trying to decide what to try. Decisions, decisions…so many choices, and so little time.

But in the next few weeks, expect to see my takes on a few button pushers and the ones I ordered just because my curiosity is killing me.

Birgit of Olfactoria’s Travels has a lot to answer for – among them, my curiosity over Amouage. Oh, that slope is so slippery and steep, and Epic Woman is on the list…and it’s all her fault! 😉

Robert Piguet’s Bandit has been ‘walking her catgirls on leashes in leather‘…so I have to, I absolutely have to try this again, it’s been so long…

Byredo is a line I’ve never tried, but when someone pays an homage to one of my all-time favorite poets, I have to sit up and take notice! So…Baudelaire and Green are thrown in, too.

I’ve heard plenty of great things about Odin New York. C’mon. With a name like that, it’s like throwing a spear into a Viking horde in berserker mode. So in goes…Odin New York – 02 Owari.

The fun won’t stop there. Another package from Olympic Orchids arrived today and is waiting for a pickup at my local post office tomorrow.

It will be glorious, I promise you!

So what are you, dear reader, dying to try? Let me know!