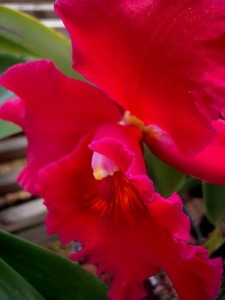 Yours truly is a biohazard. I have ten black thumbs not counting my toes, and my one living houseplant is a rose geranium named Vibeke, who resembles something out of a Dr. Seuss story, smells utterly fantastic and is nearly immortal. Like her inconstant gardener, she has a post-punk attitude problem. She simply refuses to quit.

So you can imagine my profound admiration for Doc Elly, who not only grows orchids in Washington State, she makes perfumes out of them, too. One of those was a sample of her ‘Red Cattleya’.

Scented orchids, I’ve come to learn, change their scent as they bloom, growing headier or heavier, fruitier or more indolic, evolving much the same way a perfume does on your skin. You would think that with an orchid such as the all-out velvety onslaught of that Red Cattleya pictured above, the perfume itself would also be something out of the ordinary.

You would be right. It is.

Right out of the bottle, and with no preconceived notions whatsoever, I’m very much reminded of a classical French perfume, the kind they used to make before the big, bad IFRA restrictions took over. Back in the days when perfume was opulent and rich and rewarding, the ultimate gilding of the lily, or as Coco Chanel put it so succinctly, the only accessory that mattered.

Dream of a time when being a woman was a Serious Business, ca. 1950s, say, when getting out the door in the morning involved things like foundation garments and heels, eyebrow pencils and pancake makeup, hats and gloves. You know, back when women were supposed to look like women rather than overgrown schoolgirls playing with Mommy’s makeup.

Just as a red cattleya is a glamour puss of an orchid, Red Cattleya is a glamour puss of a perfume. I wouldn’t wear this to the office, but I’d certainly wear it to the opera. Provided the opera were something romantic like Verdi or Mozart, rather than Wagner. This is a done-up, updo orchid in a French twist, diamond earrings and an opulent 1950s Balenciaga creation in red silk velvet, strapless, naturellement!

It is intensely, opulently fruity, Floral with a capital F and more than a tad exotic – there is spice in the mix somewhere. It is, in fact, every bit as gaudy and showy as the orchid that named it. In fact, I could well imagine this orchid – or this perfume – scenting the conservatory that is part of the setting of Oscar Wilde’s “A Picture of Dorian Gray”, where Dorian in his innocence makes a terrible mistake…A Victorian conservatory, then, with blooms pillaged from the far-flung ends of the Empire, outrageous, show-stopping blooms that command your attention in an instant, and are ever so slightly unsettling in their overt sensuality.

Fruity, yes, but please forget everything you know about that horrid category “fruity-floral”. This is so heady, lush and ripe I wouldn’t recommend it to anyone under at least twenty-five.

I detect apricot, a whiff of heliotrope, perhaps, vanilla, rose, violet, and raspberry, all of them blended so well and so smoothly that they are a lot more than the sum of their parts – just as women should be. I say this not because I make any distinction between the masculine and the feminine, but because this is incredibly…femme, incredibly alluring, all dressed up in that glorious Balenciaga and with everywhere to go!

The sillage is stunning, even when dabbed with a cotton swab, the lasting power fully up to an evening at the opera and cocktails beforehand. What happens after that is entirely up to you!

I could imagine this being worn by Lisa Fonssagrives in her day, in that breathtaking Balenciaga gown, the epitome of feminine devastation and elegance with a capital E. For my own part, I begin to wonder about the strangest things…something in this perfume makes me want to…sit up straighter, wear gloves (because a lady must be careful where she leaves her dabs!), put up my hair in a French twist and finally hunt down that perfect shade of red lipstick.

Or maybe not. Maybe I should wear this the next time I go out for a date and report back on the results. Too bad the date is platonic, although he is a Scorpio, so you never know…

Red Cattleya is Red. Lush. Female. In the flower, and in real life!

Above all, I can remember a quote I wrote down a long time ago, which jumps into my mind as I write, and which seems perfectly appropriate for Red Cattleya:

“When two friends understand each other perfectly, the words are soft and strong like an orchid’s perfume.”

For another angle on “Red Cattleya“

10 thoughts on “The Red Velvet Revel”